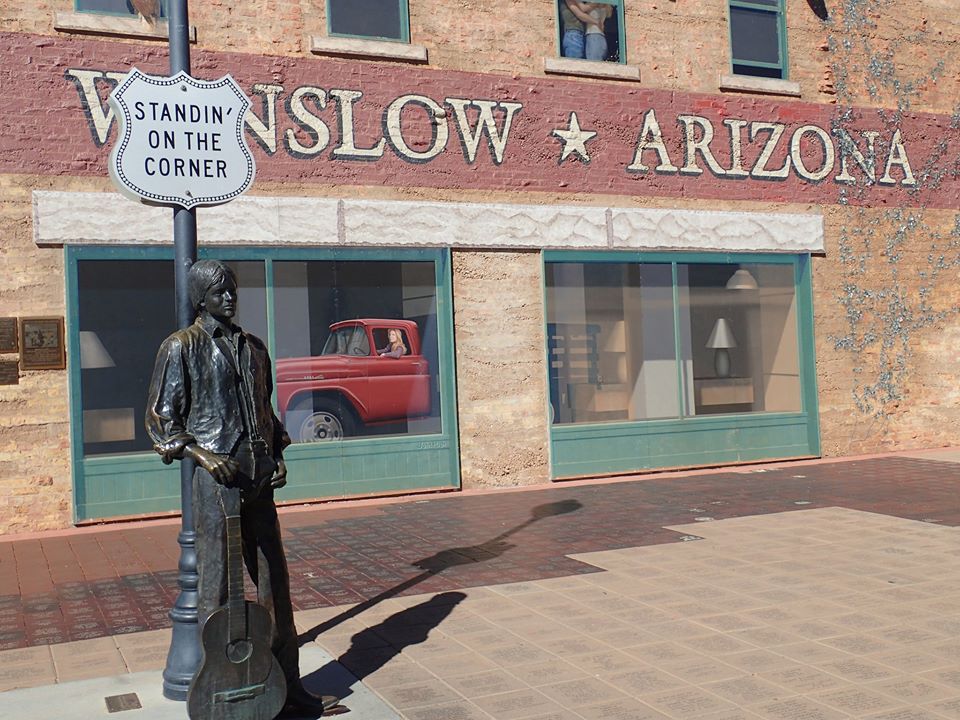 Today was a day I was really looking forward to.  There were many attractions I wanted to check out along this stretch of road.  So, I was up early, packed and out the door to……….

-6C in Flagstaff with frost on the car and ice on the ground!  Ok.  It wasn’t that bad.  It just made for a good picture.  After breakfast, it had warmed up to about -2 and with a black car with a black interior, it didn’t take long to warm up.

So on the road with the first planed stop being Winona (Don’t forget Winona!).  Well as the guide book says “It looks like Winona forgot itself”  There was nothing to see.  Of well.  Off to the next stops which do have something to see.

Twin Arrows and Twin Guns are both abandoned service stations.  Both places use to be popular with tourist, however over time, they have been vandalized to the point where they are now off limits to tourist.  I was lucky at Twin Guns that there was a open gate that allowed me to get closer to the famous tanks.

The Meteor Crater Center is a privately owned area with the worlds largest preserver meteor crater.  The crater is over 2.5 miles wide and over 550 feet deep.   It’s an awe inspiring site.  There’s a museum on site and guided tour are available.  Worth the side trip if you’re on the area.

Winslow was made famous by the Eagles song “Take it Easy”.  There’s a statue on the corner of Second street and Kinsley Ave. dedicated to the song.  There’s even a mural showing a reflection of the girl in the Ford on the wall behind the wall.  It was quite a fine sight to see.

Next it was off to the Jackrabbit Trading post to see the famous sign.  The store itself is a typical tourist trap souvenir store with generic “Route 66” shirts and coffee mugs.  Not much else to see.

Holbrook was the next stop to visit the Wigwam Motel.  A famous motel on 66, the Wigwam is usually booked months in advance.  On this day, it look deserted.  The parking lot has various old cars and trucks parked within and proved to be an enjoyable photo stop.

After Holbrook, there’s not too many landmarks.  66 is mostly highway that runs parallel with I-40.  There were a couple of places where I could venture off the freeway and explore.  It was along one of there stretches that I stopped at an old gas station for some pics.  There I met a caretaker who showed me a couple of hidden gems at the location including two paintings that were still in good shape and not faded.  A fun spot that isn’t listed in the guide books.

Albuquerque was reached just as the sun was going down.  Perfect timing.  The motel I’m staying at (Monterey Non-Smoking Motel) has a great looking sign and I wanted to get a picture.  The picture is on my Flickr and SmugMug site to see.

Dinner a a great Tex-Mex restaurant in Old Town then upload pictures.  Another great day.

Tomorrow.  Side trip to Santa Fe and checking out some Albuquerque attractions, including the Unser family museum and a house once owned by a school teacher who “broke bad”. 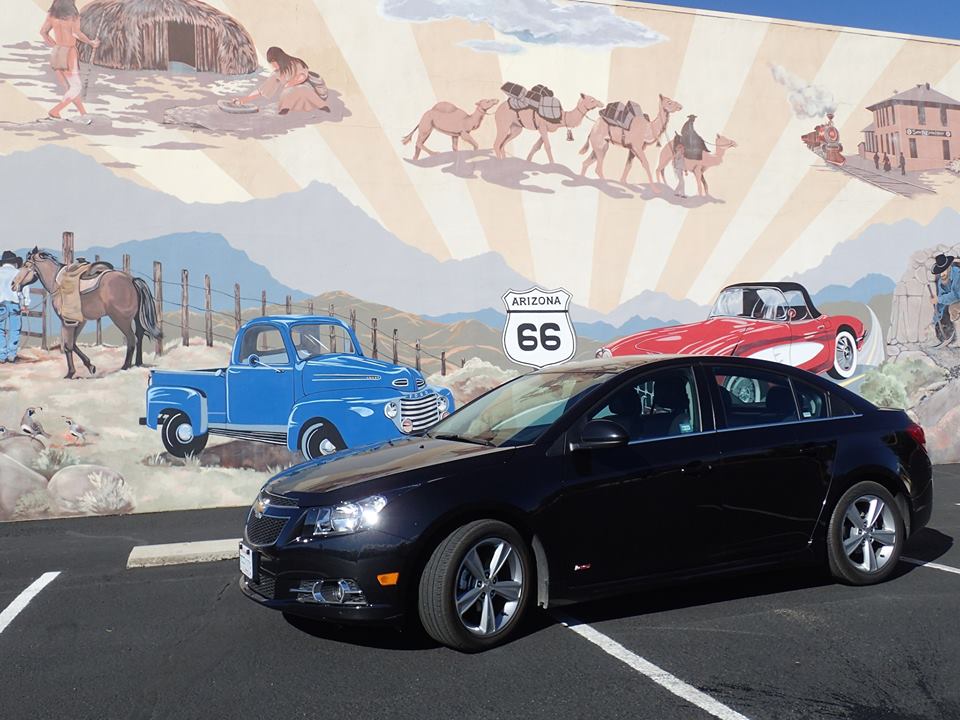 Sunday morning started off warm and sunny.  Perfect for a road trip.  The plan for today was to head south to Kingman AZ and pick up Route 66.  So off I went ignoring the prompts from the GPS to take Tropicana, and onto I-15 South.  Maps told me the I-15 to I-215 would be quicker than Tropicana to Highway 95.  Once we were in agreement and on Highway 95, it was a quick trip to Kingman.

In Kingman, it was breakfast and a picture of the car, then off to Route 66.  Before I headed east, I wanted to go to Oatman which is near the California border.  I’m glad I did.  This is a great road to drive.  Lots of corners, great scenery and on this Sunday, no traffic!  Best of all, any vehicle over 40 feet is prohibited from using the road, so no RVs or big trucks!

Once in Oatman, traffic was brought to a halt by the wild burros.  Story has it that they are descendants of the burros used buy the gold miners.  They are very tame and have the tourist trained to feed them.  If you have a carrot, you’ll have a new friend!

After Oatman, is was back to I-40 to Kignman to pick up 66 again.  From there, it was east to Hackberry where I stopped at the Hackberry General Store where there are many old cars in various states and a good looking Corvette.  A popular stop in the middle of nowhere.  A trend I would soon learn is quite common on 66.

From there, it was through many more ghost towns until reaching Seligman.  There I wanted to have a look at a popular souvenir shop, however four busloads of tourist pulled up at the same time.  I only managed to have a quick look then got out.  Too bad.

After Seligman, it was onto Flagstaff.  I was looking forward to a quick trip on I-40, however Mother Nature had other ideas.  It started to snow!  Not just fluffy flakes, but hard driving, almost ice pellets.  The freeway was covered in white and the Cruze’s traction control even kicked in a coupe of times to stop wheelspin.  Traffic on the freeway dropped from 130 KMH (80MPH) to about 60 KMH (40mph).  Nobody spun out.

Finally, Flagstaff was reached and the day was done.  A quick dinner, then upload pics.  Another great day!  Even with the snow.

Please check out my Flickr or SmugMug page (links in the header bar) for more pictures.  All pictures for this tour will be geotagged so you can see where it was taken.

Well, departure day finally departed.  Bags were packed and I was ready to go.  Off to the airport I went, breezed through check in and security only to find out the flight was delayed.  There was some concern since the final flight from Friday and the first flight from today was cancelled.  So Westjet had to figure out to get three loads of passengers to Vancouver!  Somehow they did.

Once in the air, it was a quick and smooth flight to Vancouver where you get to go from one end of the airport to the other to clear US customs.  On a side note, I’m always impressed how friendly the US security people are.  They’re always welcoming when I visit.  Canada security, on the other hand, try to make you feel guilty for leaving the country!

Past US security, I saw what has to be the most interesting combination of restaurants.  A Japanese restaurant and a Tim Hortons!  I’ll leave it to you to come up with possible menu selections.

Finally it was on to Vegas.  This flight, as opposed to the flight from PG, was about 60% full.  I had the whole row to myself.  My entertainment on the flight down was the Pixar Classic “Cars”.  Since most of the movie was based on Route 66, I thought I would see what landmarks they used in the film.  Most of them, I hope to visit.

On the ground, it was off to the car rental center to pick up my vehicle and home for the next two weeks.  I rented with Alamo.  I’ve used them before and really like how they let you pick your car.  I also took advantage of their on-line check in to bypass the counter.  What a good move.  The line up at the Alamo counter was past the entry to the kiosk!  Because of my early check in, I was able  to proceed directly to the car lot and grab my wheels.  From previous trips, I was hoping to get a Chevrolet Cruze.  I’ve rented this model twice before and have gotten to appreciate the car.  Well, my luck was good!  Not only did they have a Cruze, it was a RS model with better brakes, tires and suspension then the standard model.  Perfect for a road trip.  Off to the hotel for a nights sleep and to get ready to “get my kicks”.

Come back for day 2!